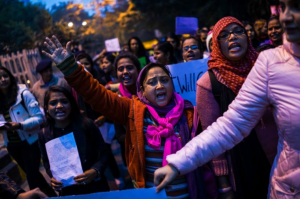 We need a lot better reports than media provides of the thousands who participated in Women’s Marches in 30 cities across India, including Delhi, Mumbai, Hyderabad, Nagpur, Ranchi, Kolkata, Bhopal, Bengaluru, & Thrissur.

The marches were called “I Will Go Out” protests after a right-wing politician said last month that “women should not be out after sunset.” This is the same ass who two years ago said there should be a death penalty for women who have sex outside of marriage.

This is the march in New Delhi. Proud to have marched with them in Brownsville, Texas.