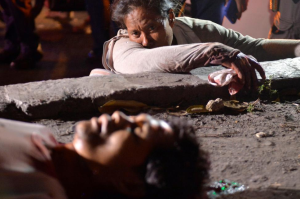 With reluctance we impose on the grief of Sentimina Bananga weeping next to the body of her partner Jimmy Said who was killed in a vigilante drive-by execution as they were begging in a Manila street. We do so only to stand with the victims of Duterte’s war on the poor.

We could write volumes about Duterte’s death squad war against the poor, we could write excoriation upon excoriation of him & of those who admire him as an “anti-imperialist” despite such monstrous criminality against unarmed people who were beloved despite their poverty.

Our deepest condolences to our sister. May her beloved parner Rest In Peace.