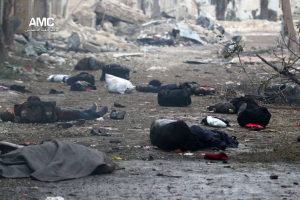 East Aleppo after Syrian airstrikes, November 30th 2016: those who defend this slaughter as liberation from “jihadists” have separated from the traditions of the antiwar movement.

The political ruptures between those who support & those who oppose this have not been as consequential since divisions among progressive forces over WWII. The integrity of the antiwar, Palestinian solidarity, & socialist movements are at stake. Where they stand & how they organize opposition to foreign intervention turning the Middle East into a killing field will determine the character of those movements.

One supporter of Syrian bombing said those who oppose this have been “bought off by the CIA.” There’s no purpose to poisoning the debate with such reckless & foolish imputations.

There is no purpose for the antiwar movement to demand the removal of Assad though many activists & organizations will hold that view. It is up to the Syrian people to dispatch Assad.

Those who are serious about rebuilding the antiwar movement against all wars should consider organized debates on campuses & other venues representing the three different currents of thought rather than pretend the number of “likes” on FB posts shows the strength of a position.