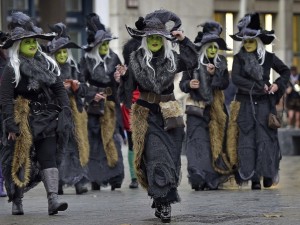 Things are looking up, sisters! Feminism is attracting new forces despite the sustained attacks on feminism & the wretched attempts to misrepresent it as uniformly white, racist, & pro-war; despite men, including Hairy Windsor, who think they’re going to lead the women’s movement cause the girls just aint cutting it; & despite Antony Loewenstein, the bozo from Australia who wrote a column in the Guardian so chock full of prejudices & idiocies about feminism that it created it’s own smelly vortex. And to think he thought he was being brave by entering the fray denouncing feminists. Does he think he’s original? Bozos like him are a dime a dozen & if he keeps it up, he’ll get picked off just like the rest of them. That would be the forte of feminism.

There are many currents within feminism & always have been; one could call it a cacophony of often competing currents. But it’s portrayed as white & privileged. The participation of working class women is ignored. Black & Latina women have been completely & dishonestly written out even though they held massive conferences numbering in the thousands to address their special concerns as feminists. In that regard it must be asked what is the operative distinction between those who write these women out of feminist history (to discredit the women’s movement) & white supremacist writers who write them out of all history?

In the women’s movement of the 1960s & 1970s the big battalions included counter-cultural women whose feminism was personal transformation & whose social politics were quite frankly insufficient. But they also were the groundbreakers in women’s health initiatives & made pagan goddess worship one of the fastest growing religions of the times.

Lesbian feminists fought for their place in the movement & many allies stood with them. One of the quainter debates in the movement was over separatism, the idea that women could somehow live apart from men like the mythical Amazons. There were ferocious political fights involving extreme red-baiting over attempts to hitch the movement to the Democratic Party. Socialist feminists were a key part of broadening the movement while sustaining constant attacks on their legitimacy as feminists, charges of infiltration, & accusations they were male-dominated. Out of such cacophony a movement was forged & rights long denied were won.

Those who try to discredit feminism betray themselves & their ignorance when they refer to feminism as a “western” thing or a white thing. Feminism was international & touched women in almost every culture & religion & country. This alarmed the ruling elites who quickly moved to co-opt the movement & make it elite. Hillary Clinton led that initiative for the US. She still does.

Third Wave feminism, mostly an amorphous & diverse current of bloggers & academics, got much of that history wrong by relying on media’s version of feminism. Call it naiveté about media, call it sloppy scholarship, but they have done a grave disservice to the history of women’s struggle against oppression. Many women journalists & bloggers, feigning support for women’s rights, attempt to create an unbreachable chasm between white, Black, Latina, & Native American women. There is no “we” in feminism they claim but only us & them. They scorn solidarity, denouncing it as an act of noblesse oblige, of privilege, of supremacy.

The problem with this ‘there is no us’ stuff is that it substitutes guilt-baiting for politics & not for the first time. But more than anything, it treats women’s oppression like a Mickey Mouse operation when it is built into the very structure of society & the deepest psyches of humankind. When we look at the massive & varied forms of violence against women around the world–& in this regard, cut the crap on holding up the US & Europe as standard bearers of female liberation–we understand that challenging that edifice is a monumental, historic task requiring the strongest & unbreakable unity. Those who piss around with the guilt-baiting (like our hapless Loewenstein from Down Under) don’t have a clue what the stakes are for women, have no respect for feminist unity, & a pitiful grasp of the meaning & power of solidarity.

That doesn’t mean Black & brown feminists have to eat it when it comes to racism within the movement; rather it demands they do not tolerate it in any form. Those who have been part of social movements like the civil rights & feminist movements well know their transformative power & ability to overcome the deepest indoctrinations of social hatred.

So things are looking up because we have a new battalion entering the fray & taking up their posts. No they’re not Amazons but they do ride brooms. They also teleport, shape shift, communicate intergalactically, & they have cauldrons where big machista egos get melted down to molten stupidity. Tell us again boys, that you’ve come to save us & you’ll see the inside of one of those cauldrons faster than you can emit a whistle or a fart.

(Photo of witches at carnival in Cologne, Germany by Martin Meissner/AP)