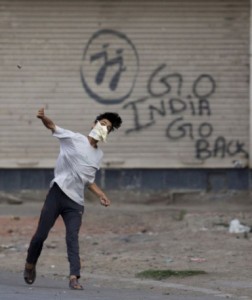 There’s a military siege going on in Kashmir, one of extreme violence, one that involves lockdowns on the internet & cell phone communication; raids on newspaper offices to shut them down; assaults on ambulances & within hospitals on medical personnel & patients; tear gas, pellet guns, live ammunition against unarmed protesters, including women & children; many deaths & thousands of injuries, some of them permanent; prohibitions on prayer.

But if one looks at media coverage, nothing much is going on at all & what is reported reads with the blandness of a weather report. What emerges in the coverage is the political line being taken by media which mimics that of Indian propaganda. Whether reported in the LA Times, NY Times, Washington Post, or Guardian-UK, it’s all the same & in plagiaristic style: “Kashmir is divided between India & Pakistan, & most people in India’s portion resent the Indian troop presence & want independence or a merger with Pakistan.”

The problem is they don’t elaborate on that “Indian troop presence” thing. They don’t report there are 700,000 Indian troops & paramilitary death squads in the small geographical area of Kashmir or explain that Pakistan has no such occupation. They don’t mention that Kashmir is the “most militarized region in the world” because of the Indian occupation. They don’t report the thousands disappeared, tortured, jailed, murdered, raped. They only talk about insurrectionary Kashmiri “rioters,” about armed “terrorists,” & never about the Kashmiri Intifada, about the mothers who protest the disappearance & murder of their sons, about the human rights groups that detail & document the crimes committed by the Indian army.

In the midst of this murderous siege, the Guardian-UK reports in a desultory fashion every four or five days; the NY Times & LA TImes less. The Washington Post, that bastion of pro-Israel reporting, actually has a little coverage, albeit with the India-Pakistani divide thing.

That leaves Kashmiri activists living outside Kashmir, Indian & other human rights activists on social media to tell the truth about what is going on. Censorship of any kind on FB & social media must be opposed because justice & solidarity demand the truth.