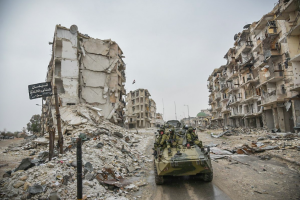 This is Aleppo after Syria & Russia ‘liberated’ it by barrel bombs & carpet bombing in late 2016. This photo was released by the Russian Defense Ministry after it entered Aleppo with tanks & ground troops. Now of course Assad propagandists claim all this destruction was done by armed militias. But with satellite imagery these days, the powers that be know exactly whose bombers wreaked this carnage. The obfuscation is intentional.

There is no liberation through carpet bombing. Not when the lives of thousands of civilians are at stake. If we learn nothing else from the apocalypse that is Syria, it is to oppose militarism, not for pacifist reasons but to protect the lives of unarmed civilians. If this be the price of protecting the national sovereignty of Assad’s dictatorship, that is indictment enough. If this be the price of defending the Syrian Arab spring uprising from Assad, he has already won the counterrevolution.

The only principled demands are for the immediate cessation of Syrian, Russian, & US coalition bombing of Syria & the immediate, unconditional withdrawal of all foreign military forces from Syria.

(Photo is from Russian Defense Ministry Press Service via AP)