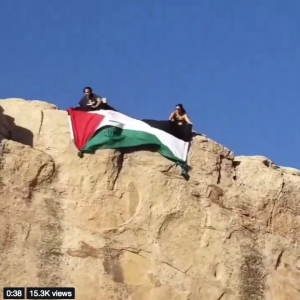 Navajo members of the Red Nation stand with Palestinians: they held up the flag of Palestine at Window Rock, in the state of Arizona–because if anyone understands the brutal extermination & expropriation of indigenous Palestinians, it is the indigenous peoples of the Americas. It is a genocide that has not ended in the Americas though it has been excised from history as if the thousands of wars of extermination never happened. The model of genocide in the Americas is that consciously used by Hitler & now by Israel.

Stand with Palestinians. Stand with the struggle of Native Americans.

(Photo is screenshot from video circulated by Palestine Observer)