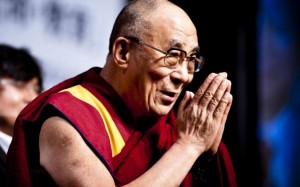 The Dalai Lama is worshipped as a demigod & addressed as “Your Holiness.” When he speaks of kindness & compassion & the oneness of all living creatures, his acolytes around the world swoon in harmony because they think he means it. Very much like the acolytes of Bernie Sanders. But there comes a time when hero worship falls apart. Or should. A time when abstract pieties & empty rhetoric don’t cut it.

In the era of genocide & sweatshops everybody has to make an accounting to political realities. What the Holiness guy is spouting about refugees in Europe can hardly be called abstract pieties. He told German media “there are too many refugees in Europe”; that “Europe, for example Germany, cannot become an Arab country”; & that “From a moral point of view…the refugees should only be admitted temporarily.”

His Holiness is stroking nationalism, white supremacy, xenophobia & the most racist & backward forces in European society. He doesn’t even come close to compassion, let alone international law governing refugee rights to asylum. He’s not just a feudal avatar. He’s a defender of barbarism. But he does it with such finesse. Drawing on the immortalized, cliched empathy of Bill Clinton, His Holiness said, “When we look into the face of every single refugee, especially the children & women, we can feel their suffering.” That must be so comforting to them that he feels their pain while lobbying for their deportation.

His Holiness, my ass! Beware of false idols. A guy who admires George Bush, kisses the hand of Shimon Peres, & campaigns against refugee rights doesn’t know compassion from horse manure.

The Dalai Lama joins the left messiah Slavoj Zizek, who rants similar views on refugees & calls it Marxism, & Bernie Sanders who says undocumented immigrants ‘threaten the foundations of the nation-state’ & calls it a political revolution. And so another one bites the dust.

(Photo is Dalai Lama in his Mother Teresa pose)