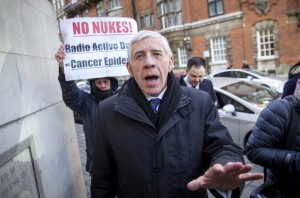 Can someone from the UK give just cause why we should not feel glee at the public disgrace of Jack Straw caught on camera offering access to the government to a Chinese company in exchange for cash? He’d have mortgaged his soul too but even capitalist companies have no use for worn-out shoe leather.

Straw & the other schnook caught (Sir somebody) claim they were duped by reporters who set them up. Is that all they’re packing for defense? Is that why Straw supported the Iraq War? He was duped!? Is that why he let General Pinochet elude justice? Why he wanted the veil worn by Muslim women to be banned? Why he was implicated in extraordinary rendition allowing regimes to kidnap & transfer people from one country to another to torture them (a practice first authorized under Bill Clinton)? Would he rather be declared incompetent than exposed as criminal?

Apparently & episodically, he’s approximated a progressive opinion. Is he pulling a Jimmy Carter & trying to reinvent himself so he can play both sides of the street? Who can keep up with a shyster? Meanwhile boogie up a storm at his demise. Margaret Thatcher (may she Rust In Peace, as our Irish friends say) lauded him; Tony Blair just came to his defense. That should be the kiss of death for anyone.