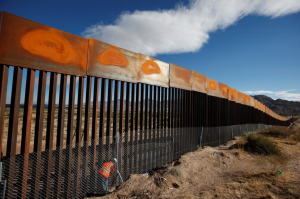 This is the section of the US-Mexican border barrier at Ciudad Juarez, Mexico. The mostly steel barrier began construction in October 2006 under the Bush regime & now covers over 600 miles (940 km) of the nearly 2,000 mile (3,145 km) border from the Gulf of Mexico through Texas, New Mexico, Arizona, & California to the Pacific Ocean.

The barrier is still under construction so it is not a continuous physical structure but where it is virtual fence it is monitored by Border Patrol agents on four-wheelers, horses, with attack dogs; electronic sensors & cameras, radio & mobile surveillance devices; helicopters & drone aircraft. It will never be a continuous physical structure because sufficient porosity has to exist for thousands of undocumented immigrants to cross. US industries, including agribusiness, construction (including dangerous fracking work), meat packing, are completely dependent on underpaid, super-exploited immigrant labor.

There are all sorts of controversies involved in the construction of the wall. Some of it is constructed on Mexican territory; eminent domain was used to cross through private farm land; sovereignty laws were ignored to violate the tribal lands & sacred burial grounds of three American tribal nations; the government waived over 30 environmental protection laws to allow the wall to obstruct a major north-south migration corridor for birds, butterflies, wildcats, ocelots, & other wild life.

The wall is not just an eyesore but a human rights monstrosity which has caused the deaths of hundreds of undocumented immigrants trying to scale or bypass it. Residents on the US side have built cross-marked grave sites near the border for those found dead. Some coroners on the border attempt to identify those who died so their bodies can be returned to their families in Mexico or Central America for burial.

The US-Mexico barrier wall is one of at least 65 built or being built around the world against immigrants & war refugees. Who can forget last year when one European government after another built razor-wire fences against refugees fleeing war? The most prominent barriers include: India to prevent immigration from Bangladesh & another on the border with Pakistan; Israel with the West Bank & Gaza to maintain apartheid; Greece to prevent refugee flight from Turkey; Turkey to prevent refugee flight from Syria; Saudi Arabia against refugees from Iraq & another to stop refugees from Yemen; Spain has two on the Moroccan border against African refugees.

There are many more of these barriers, all of them violations of immigration & human rights. Trump’s rhetoric is not more than a continuation of US immigration policy prevailing before & throughout the Obama administration.

Tear down those walls. Immigration is a human right.