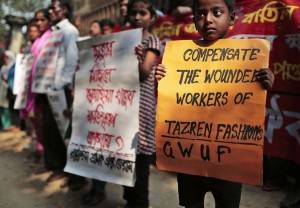 It seems worthwhile–to show the political character of Bangladeshi Prime Minister Sheikh Hasina–to repost this about the Tazreen Fashions factory fire on November 24th 2012 in Dhaka, Bangladesh, where 117 garment workers were burned to death & 200 others were injured. This fire was just one of 200 sweatshop fires in Bangladesh & happened just six months before the Rana Plaza collapse in April 2013 where 1,134, including child workers, were killed & 2,500 seriously injured. The bodies of many workers were never recovered.

Sheikh Hasina has been Prime Minister since January 2009. So when she shows up at Cox’s Bazar to do heart-warming photo ops with Rohingya children, we know she doesn’t mean a bit of it. It’s just grandstanding. Hers is the government that hasn’t yet trashed its plan to deport thousands of Rohingya refugees to an uninhabitable island buried most of the year in flooding; that obstructs refugees from applying for UNHCR benefits; that denies refugee children education after primary years; that denies refugees the right to legally work; that just signed an agreement with Burma to forcibly repatriate thousands of Rohingya back to hell in Arakan state & warehousing in concentration camps.

It should be noted that US & European retailers are as complicit in sweatshop exploitation of mostly women & children in Bangladesh as they are complicit in genocide in Burma because of their commercial interests.

In an industrial catastrophe reminiscent of the famous 1911 Triangle Shirtwaist Factory fire in New York City (where 146 garment workers burned to death), a fire incinerated the 8-floor Tazreen Fashions factory on November 24th 2012 in Dhaka, Bangladesh, burning to death 117 people & injuring 200 others. The bodies of 52 victims were charred beyond recognition & wrapped in cloth were dumped & buried in a mass grave. Bangladesh, with about 4,500 garment factories, is the world’s second biggest garment exporter after China, with clothing making up 80% of its $24 billion annual exports to several countries including the US & Europe. The Tazreen factory which opened in 2009 employed about 1,700 people.

Tazreen made clothing for many US & European retailers (as well as the US Marines). Walmart (& it’s Sam’s Club subsidiary) & Sears immediately tried to distance themselves from the disaster & claimed Tazreen produced their clothing without their authorization. In fact, documents photographed by a Bangladeshi labor organizer after the fire showed that five of the factory’s 14 production lines were devoted to Walmart apparel. More importantly, officials who attended a meeting on factory safety held in Bangladesh in 2011 (after a series of garment factory fires) claimed the Walmart official present played a key role in blocking reforms to have retailers pay more for apparel to help finance electrical & fire safety. According to the minutes of the meeting made available to The New York Times, Walmart’s director of ethical sourcing said, “It is not financially feasible for the brands to make such investments.” And in a sweatshop economy he’s absolutely right.

The Bangladesh government claimed sabotage & arson as the cause of the fire but this was only a cover for the manufacturers since fire officials report 700 people had died in garment factory fires since 2006 & Tazreen was later proven to be an electrical fire. Factory conditions remain wretched, with overcrowding, locked fire doors, & no enforcement of safety laws. There have been other factory fires since with more deaths & in April 2013, Rana Plaza, an 8-story garment manufactory collapsed killing 1,100 workers & injuring 2,000 more in an extremely gruesome industrial accident where many were buried in the debris.

When retailers whose clothing was manufactured at Tazreen met in May 2013 to discuss compensation payments, Walmart & Sears did not see fit to show up because they are completely devoid of social conscience. They’re like psycho-corps.The Bangladesh garment manufacturer’s association offered a measly $1,250 compensation to each family of those who died (approximately two years pay). We don’t know if those injured even received an offer. Unfortunately the offer was more for show because today, on the second anniversary of the conflagration, relatives of those who died protested outside the factory demanding unpaid compensation.

At the time of the fire, thousands of Bangladeshi workers hit the streets in protest, closing down over 200 factories, blocking major highways, throwing stones at factories, & smashing vehicles. They demanded justice for those killed & injured & improved safety. They continue to fight but the odds against them are enormous–the entire edifice of sweatshop economics, including retailers, their own & other governments, manufacturers associations, & a compromised labor leadership.

Sweatshops are a fixture of neoliberal economics & the battle against them won’t be won without international solidarity. That mission should not be left to garment workers alone & students in the plundering countries. It should not just change our shopping habits but should transform our whole way of operating in the world since we’re the ones benefiting from the super-exploitation of sweatshops.

Our fullest solidarity with the garment workers of Bangladesh.