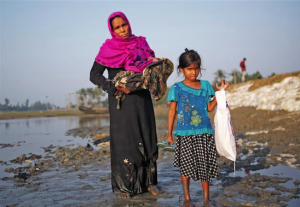 We are watching in real time, thanks to social media, how regimes around the world are weaseling their way around the Rohingya genocide to protect their commercial interests in Burma. To do business on a grand scale in Burma, they have to court the military junta which controls the economy. The Rohingya & their supporters should try to understand that it isn’t personal; it’s just business. Or more aptly, that’s just capitalism.

On their way to the Asia-Europe Meeting (ASEM) in Burma on November 20-21, the Swedish & German foreign ministers along with high-ranking EU official Federica Mogherini stopped in Bangladesh to meet with Prime Minister Sheikh Hasina. They expressed their ‘grave concern for the atrocities against the Rohingya people’ in Burma & without batting an eyelash at the political insanity also expressed support for the Burma-Bangladesh plan to forcibly repatriate the refugees back to apartheid, concentration camps, & continuing genocide in Arakan state. Then the three diplomats traveled on to Burma for the ASEM summit where they agreed not to discuss the genocide but instead focus on fighting terrorism & violent extremism & trying to censor social media. These criminal politicians are trying to make forcible repatriation the solution while Burma is still engaged in genocide because that’s a way to weasel around taking a political stand against the genocide so they can protect their economic & military investments in Burma. They truly represent the barbaric phase of capitalism.

The photo is a Rohingya woman with her newborn & small daughter arriving in Bangladesh less than two weeks ago after a flight for their lives. She should not be forced to take her children back to a concentration camp so that the Burmese military can finish exterminating the Rohingya people.