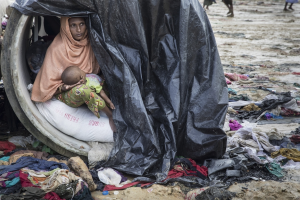 The US State Department announced it will provide $32 million of humanitarian aid to Rohingya refugees & claimed this will bring the total of US aid to “Burmese refugees, including Rohingya” to nearly $95 million in 2017. The aid package will include shelter, food, healthcare, water, sanitation, & other aid to refugees in Bangladesh. Sounds good doesn’t it? It’s nothing but political grandstanding. Rohingya refugees will be lucky to see a dime.

In 2010, the US pledged $100 for humanitarian aid to Haiti earthquake relief; overall nations pledged over $13 billion to be managed by Bill Clinton & the Haitian prime minister. Millions were stolen, including by Clinton, & there is no evidence any was dispersed to build housing. They couldn’t even provide port-au-potties when hundreds of thousands were living without shelter. There’s no accounting of the money, including how much was actually released, but there’s considerable evidence that none of it was used for humanitarian aid so much as to turn Haiti into a sweatshop haven for US garment manufacturers.

Secretary of State Rex Tillerson said he spoke to Aung San Suu Kyi after her televised address denying genocide of unspecified people in Arakan state. He told her the US found allegations of human rights abuses “deeply troubling” but “welcomed the Burmese government’s commitment to end the violence in Rakhine State & to allow those displaced by the violence to return home.” Did he listen to a different speech than we heard?

Let’s just cut through the baloney: if it isn’t funny money altogether, $32 million or $95 million is chump change compared to the billions of dollars US corporations are milking out of their investments in the Burmese economy. The US knows exactly what is going on in Arakan state; it understands the fascist character of the junta. But in the interests of plunder & profits & to counter Chinese & Russian influence with the generals, it has chosen to turn a blind eye to genocide. Reimposing sanctions, the US could bring that economy to crisis until the junta ended genocide–if it wanted to. But it doesn’t. Which is why they pledge funny money & play stupid about genocide against the Rohingya people.

This is 20-year-old Sameera with her 7-month old infant living in a cement cylinder in Cox’s Bazar, Bangladesh. Thousands have been living under such conditions for years & will continue to do so unless there is an international & sustained clamor for humanitarian aid, especially from those countries milking profits from Burma, including from this genocide.