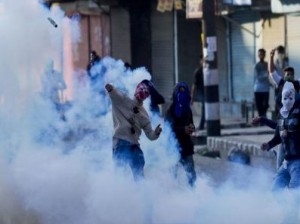 The Times of India’s coverage of Kashmir is giving the Guardian-UK’s coverage of Palestinians & the war in Afghanistan a run for its money in utter foolishness.

They printed this photo of activists protesting the shooting deaths of civilians & the sexual assault of the Handwara minor girl. The Times noted that four people had been shot dead by soldiers but emphasized that 47 people, including 40 security personnel, had been injured in “clashes.” “Clashes” is one of those media euphemisms for when unarmed civilians are attacked by heavily armed soldiers.

An Indian army spokesman said the forces, many of them trained death squad members, opened fire only after “mobs” tried to storm the army camp with stones but he insisted the soldiers exercised restraint. That would explain why the injured protesters were treated for bullet wounds & being hit by teargas shells but they only mentioned one soldier was treated after being hit by a stone. If the protesters were packing anything heavier than little stones, those death squad guys would have to go home to mama crying.

The truth of the matter is that Indian soldiers are armed with TAR-21 assault rifles made in Israel for use in urban warfare. It’s one of the most modern & deadliest assault rifles in the world. It can accommodate a 30-round magazine & sustain a rate of fire of 750 to 900 rounds per minute. Does that sound like restraint against unarmed civilians? Does this photo of a young man enveloped in tear gas look like restraint?

The work of Kashmiri activists on social media is forcing an end to the news blackout that prevailed for so long. But as we know from media coverage of Palestine, India & media will try to control the narrative just as malignantly as Israel & media does about Palestinians, turning them from freedom fighters into terrorists.