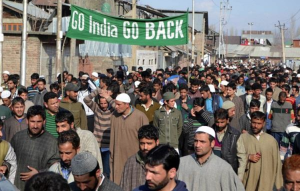 One way of looking at the occupation of Kashmir by 700,000 soldiers & special forces–the highest ratio of soldiers to civilians in the world–is that it represents the Indian government’s measure of the level of political resistance among Kashmiris to colonialism & occupation. It represents India’s fear of unarmed civilian protesters. That’s why the hunt to kill operations, the pellet guns, the overkill. When the men with the guns are running scared, they become more lethal. That’s why Kashmiri activists have reached out on social media to bring others around the world to stand with them. Kashmiris have to know they aren’t alone as they stand on the front lines of one of the most important freedom struggles of our times.

(Photo from Go India Go Back wall on FB)