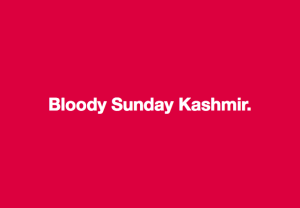 Kashmir is grieving. Indian occupying forces shot dead five militants & five civilians today in one of its hunt to kill operations in the Shopian district south of Srinagar. Thirty other civilians were injured by live ammo, pellet guns, & tear gas after the army swooped down on the village of Badigam on a tip from a snitch/informant. (May they rot in hell.) Some Kashmiris are calling this massacre Bloody Sunday after the 1972 slaughter in Derry, Northern Ireland when British occupation forces shot down 28 unarmed civilians during a peaceful protest against internment of political activists. Many of those killed were shot while fleeing or were shot trying to help the wounded.

The biographies of all those killed are not yet reported except for the militant Mohammad Rafi Bhat, a university sociology teacher who only went underground with the rebels last Friday. He obviously went without martial or guerrilla training & probably had no idea how to handle a gun when the army surrounded the house where they were hiding. The five militants were given the chance to surrender to the army; the army even brought Bhat’s father to the site to prevail on his son to surrender. Not surrendering was certain death. They were all killed & the house razed to the ground. This is not the time to debate the political sagacity of urban guerrilla warfare as a strategy against occupation, but it is necessary to understand what it is that draws young men to leave work & family to engage in such a dangerous form of political activity–although as we know from the death of Adil Ahmed who was run over & killed by an armored vehicle, just walking down the street is a dangerous activity in Kashmir. Many have been shot & killed or injured just looking out the windows of their homes. Mostly the militants are inspired by indignation & opposition to occupation & frustration at the quotient exacted by it in human suffering. They hope, by engaging in guerrilla warfare, to rouse others to action & speed the day of liberation. It doesn’t have a stellar past, but its efficacy as a political strategy is for Kashmiris to decide.

Kashmir is grieving not just the political murders of ten people today but actually 14 in the past 48 hours since four were killed in a hunt to kill operation on Saturday. These are just the latest murderous encounters with Indian occupation forces who have killed at least 89 young men since January, both militants & civilians. That’s close enough to one person killed by the occupying army every day in Kashmir. Staggering levels of violence. Unimaginable levels of loss & grief. Hundreds of civilians have also been injured, some disfigured & disabled, by protesting at the sites of hunt to kill operations in order to protect the militants.

The most meaningful condolences we can render Kashmiris is renewed commitment to educating others to the justice of their struggle. Our heartfelt condolences for the loss of so many freedom fighters in just one weekend. May they Rest In Peace.