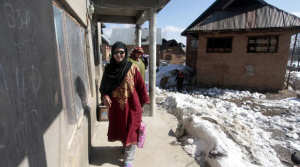 This is a continuation of the story of 15-year-old Insha Mushtaq who was inside her home when she was struck by pellet munitions fired by an occupying soldier & was blinded in both eyes. Insha is one of at least 1,562 mostly Kashmiri children & youth who were partially or fully blinded by pellet guns just in the last 6 months of 2016. Another 7,330 were injured by pellet guns & though not blinded suffered disfigurement & permanent disability, pain, & health problems because the pellets cannot all be removed from vital organs.

Blinding & disabling Kashmiri young people is not accidental but an intentional military stratagem & human rights crime to demoralize & exact maximum suffering & to disable resistance to occupation & the fight for self-determination. Israel employs the same stratagem against Palestinians. The spirit of colonialism has never been other than snaggle-toothed barbarism. There is no higher vision–not even nationalism.

We know Insha’s story because Al Jazeera & a documentary video reported on the many surgeries she endured to extract pellets & repair tissue. They also reported about the emotional turmoil Insha & her family went through in accepting her disability & knowing how to deal with it. What concerned them is that she was a girl who loved to read & learn & that would surely be much harder.

There was in one account the distinct whiff of pity for Insha from the reporter. Being disabled in any way is a devastation. Everything becomes harder. But disability rights has hammered out the understanding that disability does not make inferior nor is it a death sentence. It requires emotional transitions, major adjustments, physical accommodations & learning new ways of doing things. No one not disabled would be so cavalier as to dismiss just how hard it it, especially for young people, to come to terms with the grief & loss of disability. That’s why disability rights have been so important in forging respect which does not include pity but also demands social services necessary for a good life.

This update is about Insha returning jubilantly to school when it reopened last week, ready to learn, thrilled to see her old classmates. Our girl is back. There’s a lot of healing can be done when surrounded by love.

Insha also lives in a society dealing with thousands of other young people blinded & disabled, not to mention those disabled by age or accident. There is no inspirational silver-lining in disability. It is what it is & it ain’t what it ain’t. But the one think it ain’t for sure is a sign that life is over & is only to be endured as hell on earth. It means a new way of doing things.

And for the record: it won’t stop Intifada. One of the most notable things about the massive uprisings of the past decade has been the large number of activists in wheelchairs on the front lines of social struggle, especially in the Arab uprisings taking on the military.

Welcome back Insha. May your journey be blessed.