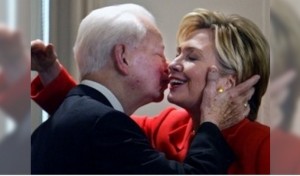 The thing about the Democratic Party is that its electoral presentation of itself is very different from its internal character. It’s not fundamentally different than the Republicans in its political rancidity. One of the elements of that is the large number of Ku Klux Klan members who were leading Democratic politicians, including representatives, senators, Supreme Court judges like Hugo Black, & presidents like Harry Truman.

The purpose of the Democratic Party is to manage dissent from the left & make sure it doesn’t take an independent course. The purpose of the Republicans is to manage the rightwing & because the rightwing in this country is increasingly deranged & violent, this has made the Republican Party a hotbed of lunacy & generated an organizational crisis leading to the Drumpf phenomenon.

Recently, David Duke, the former Grand Wizard of the KKK & an unreconstructed white supremacist, endorsed Drumpf. There was a furor because Drumpf refused to disavow that, pretending to not know who Duke was, but of course, because they’re turds of a feather. But is that really any different than Hillary Clinton boasting of her association with Henry Kissinger, one of the most despicable war criminals ever spawned?

Rightwing activists on social media responded to the Duke furor with some damning charges of their own. They circulated photos of Hillary Clinton smooching Senator Robert Byrd in 2004 & eulogizing him when he croaked in 2010. Byrd was a leading member of the KKK in West Virginia throughout the 1940s when he was in his 20s & 30s. He was a recruiter & held the leadership position of Exalted Cyclops.

Desegregating the US army in WWII was a major political campaign of the times. Byrd wrote: “I shall never fight in the armed forces with a negro by my side … Rather I should die a thousand times, & see Old Glory trampled in the dirt never to rise again, than to see this beloved land of ours become degraded by race mongrels, a throwback to the blackest specimen from the wilds.”

There was a strong current of these kind of segregationist, Confederate-minded politicians who fit right into the Democratic Party prior to the Civil Rights Movement. But after that movement discredited white supremacy, they began to do public contrition about their past in order to sell the Democrats as the party not just for white racist workers but for Black workers too. They were popularly portrayed in media as an anomaly in the party, rather than its bedrock. After Byrd became a politician, he also began to dance around about his past but he remained a segregationist in his politics.

He was not only a staunch segregationist all his life, consistently opposing all the major civil rights legislation, but he was in general a stone-cold reactionary who opposed women’s & LGBT rights & supported all the wars.

Generations of dreamers & compromisers have hoped to transform the Democrats into the party it claims rather than the cesspool it is. One wonders how people like Sanders who claim to be inspired have managed to survive without becoming wheelers & dealers too. The answer is, they haven’t. History shows quite clearly, it isn’t the party that is transformed but the dreamers.