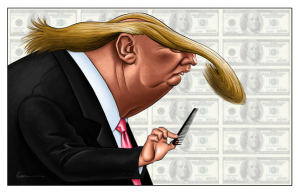 With the specter of impeachment haunting the US (for Trump’s obstruction of justice), the hilarity of Trump’s tenure in office emerges in technicolor. Who can ever forget the Bowling Green massacre? “Alternative facts”? “Deconfliction” as a new word for every agency of the government being at each other’s throat? “Narratives” to explain why not a single person or agency from the White House to Congress to FBI & CIA can get their lies straight? Or personalities like Kellyanne, Ivanka, Jared, Spicer, that Huckabee who’s even more pathetic than her father, & mafiosi like Flynn & Manafort? Not to mention the Deep State & soft coup nonsense or how Trump emboldened libertarians to come out from under their rocks.

There isn’t a shred of truth to that old misanthropic cliche that people get the government they deserve. Most Americans have known for decades that the government is not by & for the people but for now there is no viable alternative. This is not what we deserve.

Those who allowed Trump to hijack the election hoped he would be able to accelerate a dramatic shift to the right & a frontal assault on civil liberties & social justice. Clinton’s populist rhetoric would have required a slower process though she would eventually have implemented the same policies. That’s how capitalist governments work.

Pence will soon be president. He isn’t worse than Trump & in fact is as stupid, racist, misogynist, hateful, but he is less vulgar & is not insane.

If we want to end this travesty, we have to continue what youth began with the anti-Trump protests, initiatives like the international Women’s March, the anti-Muslim ban protests. We have to rebuild the antiwar & other social movements. We’re on the way. It’s way too early to despair.