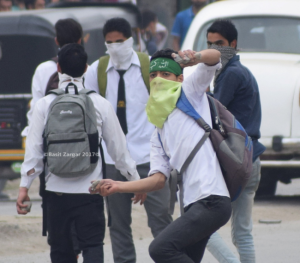 It isn’t admirable that a young Kashmiri would become an officer in the Indian army rather than part of resistance to the occupation even if he wasn’t deployed in Kashmir. But kidnapping an unarmed, off-duty soldier from a family wedding, torturing him, & killing him is an abomination. Those are the methods of oppressors, not freedom fighters.

No guerrilla group has claimed responsibility for the crime & there is not an extensive pattern of such crimes committed by them in Kashmir. The Indian government launched an investigation which will most likely include an increase of violence & search & summary execution operations against Kashmiri youth.

It is entirely possible, if not probable, that this crime was not committed by Kashmiri opponents of the occupation but by agents provocateurs to justify an increase in levels of barbarism in Kashmir. If it was by a guerrilla group, it is deplorable because those who suffer the consequences will be unarmed Kashmiri youth fighting to end the occupation.

Wish Ummer Fayaz had made a better choice in loyalties but may he Rest In Peace. This was a monstrous crime.

Photo is Kashmiri freedom fighters put at risk by whoever murdered Ummer Fayaz.