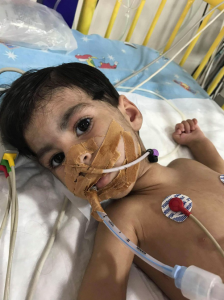 A very sick 14-month-old Amal Muhammad Felfel from Gaza required medical care in a West Bank hospital. Israel allowed the little girl to be moved to hospital in the West Bank but refused to allow her parents out of Gaza to go with her. They expect her to be there for ten days of treatment. A very sick & frightened little girl with tubes & plugs all over her body & the state of Israel will not allow her mother & father to hold her hand! For anyone who has ever dealt with a sick child, that small-minded but vicious cruelty is enough to indict Israel.

This cruelty could be considered another nail in the coffin of a bantustate (two-state) ‘solution.’