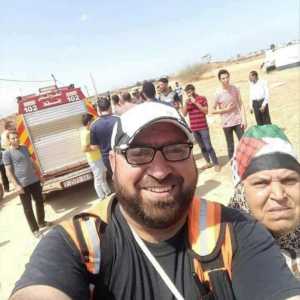 There’s a video on Twitter of a small group of Palestinians peacefully protesting in Al-Bireh in the West Bank as part of the 1948 Nakba commemorations. In the video, Israeli soldiers shoot an elderly man in the leg or foot & when medics rush to attend him where he is collapsed on the ground, they shoot at the medics too. With such documentation, it must be asked why the UN or ICC will not get off their dead rumps to charge & prosecute Israel for clear violations of international law. But then of course, they never charged them for shooting ambulances or bombing hospitals & clinics in 2014. Or for injuring & killing clearly marked journalists covering the Great Return March.

This is 35-year-old Mousa Jabr Abdulsalam Abu Hasnayn, a paramedic at the Great Return March, taking a selfie with his mother. He is among the 61 Palestinians shot down in cold blood by Israeli snipers on May 14th who are being vilified as Hamas terrorists. If the UN or ICC refuse to prosecute these human rights crimes, we must try them before the court of world opinion & build Palestinian solidarity & the BDS movement as a peaceful weapon for telling the truth. May they Rest In Peace.