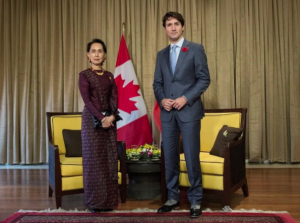 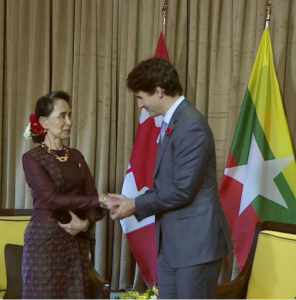 Being slick in the same way Obama was, Canadian president Justin Trudeau put on his mad face when he met yesterday with Aung San Suu Kyi at a side meeting during the Asia-Pacific Economic Cooperation (APEC) summit in Vietnam. Since the APEC summit is a gathering of some of the most repressive governments in the world, there’s no point in asking why Burma was allowed to attend while it is conducting genocide against the Rohingya people or why that genocide wasn’t the number one topic of discussion about economic cooperation with Burma.

There’s no transcript of the meeting between Trudeau & Suu Kyi but Bob Rae–who Trudeau appointed last month as an adviser & special envoy to Burma for the Rohingya crisis–claims Trudeau was “very direct.” There probably isn’t much diplomatic distance between Trudeau’s “very direct” compared to Trudeau’s usual smarmy in relation to Suu Kyi & Burma. If we want to know what the real relationship is between Canada & Burma we need only read the business pages, particularly those concerned with joint ventures between Canadian mining companies & the military junta which controls the Burmese economy. These joint ventures involve widespread land confiscations from farmers, massive environmental destruction, human rights crimes (including the use of white phosphorous against protesters) & egregious violations of labor rights.

Along with the US & EU, Canada imposed economic sanctions on Burma between 2007 & 2012, including an arms embargo with loopholes big enough to move subsidies through in the form of so-called humanitarian aid. The Canadian company Ivanhoe Mines (now named Turquoise Hill Resources) had a 50/50 joint venture project with the military called the Monywa Copper Mine. It was an open pit mine (the most destructive form of mining) with notorious environmental, human rights & labor rights crimes investigated by Amnesty International. To comply with economic sanctions, Ivanhoe Mines divested its fifty-percent stake in the project in a labyrinth of secretive dealings, creating the third-party Monywa Trust to circumvent scrutiny while breaching the sanctions. Amnesty International in Canada has asked the Canadian government to investigate this financial maneuver but Trudeau has not complied. It appears Monywa mine assets have now been transferred from the trust to a joint venture between China & the military. Once again, the divestment arrangements are secretive.

Canada played along with the fiction of a civilian government under Suu Kyi & lifted economic sanctions in 2012. Since 2013, it has provided over $95 million in so-called humanitarian aid, particularly for programs involving women & children’s health. Apparently those programs do not involve Rohingya women & children. It also now has about $17 million in annual trade with Burma. The sanctions were lifted & investments & trade openly resumed at the same time as the Burmese military was conducting genocidal operations against the Rohingya people in 2012, 2015, 2016, & now.

If Canada, the US, & EU want to get in on the neoliberal gold rush in Burma, it is essential to maintain the deceit about Suu Kyi heading a civilian government as a counterbalance to the generals. But since the military controls the Burmese economy, it is impossible to do business in the country without doing business with the military. If one reads the details of the economic sanctions, it is clear Canada, the US & EU know exactly who runs the government & economy of Burma. That’s why they are all reluctant & even opposed to censuring Suu Kyi for the Rohingya genocide–hoping to breath new life into the tattered fiction of Suu Kyi as a human rights icon leading a civilian government. The military is in complete charge in Burma & always has been with Suu Kyi playing an essential & willing role in the deceit.

(Photo of Trudeau with Suu Kyi at APEC side meeting yesterday)