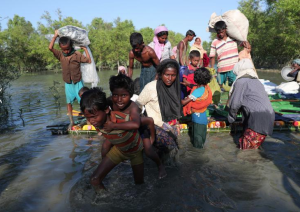 Not letting genocide stand in the way of doing business, a delegation from the International Monetary Fund visited Burma this week for its annual economic checkup. The Reuters reporter Lesley Wroughton said: “While IMF missions do not look into politics, they do consider ramifications of political developments on an economy. So far, there are no signs that the crisis has had a direct bearing on Myanmar’s economy because it is located in a remote northern part of Rakhine State.” Where can we begin to fill in the reporter on what she missed in Economics 101 about the inextricable nexus between economics & politics?

Perhaps the reporter does she not understand the stranglehold the military has over every aspect of the Burmese economy but it is not possible the IMF is unaware that the generals or their minions & relatives control the economy top to bottom, including banking, trade & commerce, telecommunications, industry, transportation, the Suu Kyi government–& genocide. If the Rohingya genocide has not affected the economics of Burma, it is not because Arakan/Rakhine state is remote but because none of the junta’s investment partners from the US, Canada, Europe, India, China, & elsewhere give a damn about justice or genocide but only about financial returns on their billions of dollars of investments in the neoliberal gold rush in Burma. If the politics of genocide do not have an impact on economics (yet), it is only because neither fascism nor genocide will stand in the way of profits–which is why these investment partners so elaborately maintain the fiction of a civilian government led by Suu Kyi that can bring reform.

Photo is Rohingya refugees coming off a raft they improvised from plastic & bamboo to cross the Naf River. They are having a powerful affect on world politics, no matter what the generals, Suu Kyi, & other governments claim, by bringing millions around the world to their defense.