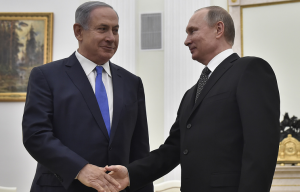 TASS quoted the Israeli Ambassador to Russia, Zvi Heifetz: “We are not getting involved directly in the operation in Syria. It is clear that we support Russia fully in the fight against international terrorism, against ISIL (former name of the Islamic State terrorist organization banned in Russia).” Heifetzsaid the entire “normal” world supports what Russia is doing: “Russia decided to do something in that regard & it is doing it.”

The article went on to explain that Russian bombers did not break the ceasefire in effect since February 27th because “The ceasefire regime does not cover the Islamic State & Jabhat al-Nusra terrorist organizations as well as other groups ruled terrorist by the Security Council” of the UN. It claims Russian bombers are “delivering pinpoint strikes” on ISIL & al-Nusra facilities at the request of Assad.

Do Russia & Assad include hospitals as ISIL & al-Nusra facilities like Assad apologists do? Can they tell us what & where those facilities are & where those pinpoint bombs are hitting? Is there any “collateral damage,” as militarists like to call civilian deaths? If not them, who does Russia say is dropping those cluster bombs & using white phosphorus? Because if it knows where ISIL & al-Nusra facilities are, it knows what country is competing with it for air space & is guilty of war crimes in Syria.

Photo is Netanyahu & Putin at their April meeting in the Kremlin. Another picture worth a thousand lies. Can Palestinian supporters who support Russian military intervention on behalf of Assad explain this alliance to us without obfuscation?

(Photo from TASS by Alexander Nemenov/EPA/POOL)