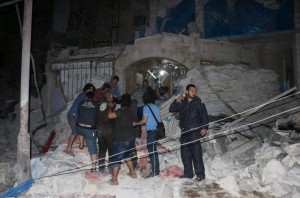 An article titled “Syria: Aleppo Doctors Fight Back Against US, NATO False Flags & Terrorism” published last month in 21st Century Wire is circulating on social media by supporters of the Assad regime. It is an interview with a doctor named Tony Sayegh who claims western media has completely misrepresented the Russian & Syrian bombing of Aleppo & that the destruction is mostly caused by terrorist groups like al-Nusra.

It’s so hard to unravel what is going on in Syria but it would be a whole lot easier if those circulating this rubbish spent a moment vetting their news sources. In this particular article, their antennas for propaganda should have gone ballistic at the discussion about the bombing of the MSF/(Doctors Without Borders)-backed Al-Quds hospital in Aleppo last April where several medical staff & patients were killed.

The interviewer says: “As for al-Quds, Tony Sayegh does not believe the media reports. Four years ago there was no such hospital in Aleppo. Whatever it was that was attacked, it was not an established, well-known health facility. Tony Sayegh believes that the images of an anonymous building with sandbags outside indicates that it was a military site.”

“And it is not mentioned that the al-Qaeda group Jabhat al-Nusra in Aleppo has taken over health facilities & used them for other purposes. Already in April 2013 New York Times wrote that al-Nusra “..has set up camp in a former children’s hospital & has worked with other rebel groups to establish a Shariah Commission in the eye hospital next door to govern the city’s rebel-held neighborhoods”.”

Now if that does not set off alarm bells–especially how strongly it resonates with Israeli justifications for bombing hospitals, apartments, schools, refugee centers in Gaza–then there is no hope for misguided Assad supporters.

That’s why you have to vet media sources–to get the story straight & to understand what political forces they represent. The 21st Century Wire says it is inspired by libertarian sites like Infowars which is a political melange of conspiracies, racism, misogyny, xenophobia. The 21st Century Wire was launched in December 2009 at the UN Climate Summit in Copenhagen, “initially as a vehicle to expose the mythology behind global warming & climate change, & has since expanded coverage to include exposés on intelligence, foreign policy, the war on terror, technology & Wall Street.” So by its own admission 21st Century Wire is libertarian. Or when it comes to reliable news, complete horse manure. The journalistic style is, if you can’t justify barbarism, then deny it happened.

With some improvisation, the article appears to draw on an earlier piece in Telesur titled “The ‘Aleppo Hospital’ Smokescreen: sometimes it’s okay to bomb hospitals,” by Assadist Tim Anderson, which is a sophisticated & sleazy attack on MSF/Doctors Without Borders & “western corporate media.”

Anderson claims hospitals in Syria are militarized zones in the same way as Israel claimed Hamas stored missiles in apartment buildings, hospitals, schools. That would of course suggest that MSF is an adjunct to terrorist groups–although doctors have an obligation to treat the injured without asking their political affiliations. Anderson says: “There is some debate as to whether clinics or hospitals run to service banned terrorist organisations have protection under international humanitarian law. Certainly US law does not allow it. A few years back the United States jailed US doctor Rafig Sabir for 25 years after it emerged he had been ‘on call’ to treat al Qaida fighters in Saudi Arabia.” Since when did the US Pentagon become the standard bearer of international law?

Actually there is no debate but only arrant flouting of international law by the US, UK, Turkey, Syria, Russia, Israel, & the Saudi Arabia-led coalition bombing the hell out of Yemen. Hospitals, all medical facilities, & ambulances are protected under international law. When apologists for Assad find themselves using the same arguments as Israel & the US Pentagon, they are giving their reactionary loyalties away.

If you want to shill for Assad’s dictatorship, you’ll find yourself among some very unsavory allies.