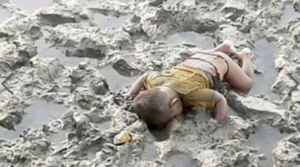 The Rohingya Alan Kurdi: 16-month-old Mohammed Shohayet.
The little boy drowned along with his mother, uncle, & 3-year-old brother trying to escape to asylum in Bangladesh from genocide in Myanmar. His father Zafor Alam told CNN: “When I see the picture, I feel like I would rather die. There is no point in me living in this world.”

Zafor Alam’s narration of their harrowing run from village to village to escape the Myanmar military is overwhelming & must be used to actively support & build Rohingya solidarity around the world. It can be read in this link:

End the genocide in Myanmar. Full civil & human rights for Rohingya. Full refugee rights for those forced to flee for their lives.