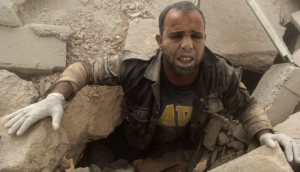 Assad supporters led by Beeley & Bartlett have built an entire industry savaging the White Helmet rescue workers. On the level of propaganda, it’s scurrilous but it betrays the psychological & intellectual level of pre-adolescent psycho. The latter is for a shrink & psychotropics to deal with; the former is a political matter that needs to be addressed, loathsome as that is.

Civilian rescue teams emerged in Syria in 2012 when Assad began bombing cities or areas where there was massive public opposition to his dictatorship. It was neighbors & residents coming to rescue the injured trapped in rubble from the bombing. Of course foreign agencies with ulterior motives glommed on to them; it happens all the time to human rights groups all over the world on an array of issues. In some cases, it tempers the resistance of those groups. But in the case of Syrian rescue workers, it got them professional training in urban search & rescue operations, emergency & trauma care, setting up & managing field hospitals in a bombing zone. It made them more effective in rescuing people buried in rubble, in treating their injuries, & saving their lives.

But Bartlett from her pulpit at Sott (a shabby journal she edits for the reactionary demento David Icke) pounds out accusations that “the Soros-funded White Helmets were caught faking civilian casualties of Russian airstrikes” & “massive evidence” shows they were set up to support what she calls the head-chopping jihadists in Syria. The “massive evidence” she produces is culled from various Russian media sources or from Beeley’s numerous blogs denouncing them as an al-Qaeda & ISIS front. Even in small claims court, the judge would throw that kind of rubbish-based evidence out.
If people fall for this rubbish, that’s unfortunate, but capitalism has produced many kinds of cognitive disorders in many, not to mention competing economic, social, & political differences.

Media reported recently that 150 White Helmets have died in their work but that is likely conservative & only an accounting since 2014 when they became a formal group of citizen rescuers. There is probably no way of measuring how many self-sacrificing, courageous people died rescuing people before the group received training in how to navigate piles of shifting cement rubble without getting buried in it.

There are an estimated 3,000 White Helmets, mostly men but also women, & they receive a stipend from agencies funding them. The question that Assadist propagandists never address is exactly what do those foreign agencies give these citizen rescuers to induce them to remain in bombing zones, set up field hospitals targeted by Syrian & Russian bombers, climb mountains of shifting rubble to pull out bodies & survivors, & treat the injured with limited medical training? How much does it cost these agencies to get human beings to risk their lives in service to others & why bother to pay them when for so long they did it without compensation but just to save others from being buried alive?

Media is reporting that millions of Syrian children are emotionally shattered by the war, many enduring complete psychological collapse beyond PTSD. How do these rescue workers handle their own emotions & witness the terror, grief, & tragedy around them without the PTSD or catastrophic trauma experienced by all victims of war? They don’t. That’s what makes them so extraordinary.

Respect & tribute to the White Helmets.

(Photo of White Helmet buried in rubble from Reuters)