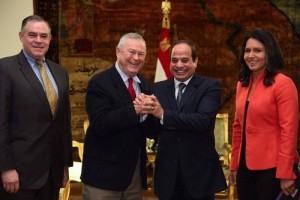 Rep. Tulsi Gabbard, the congresswoman from Hawaii who endorsed the Sanders campaign, spoke at The People’s Summit last weekend in Chicago where Sandernistas met to discuss perspectives after their candidate bombed out.

Gabbard has a strong anti-interventionist stance which went over well with the Sandernistas & also goes over strong with supporters of Assad who are circulating her videos opposing US intervention in Syria because she supports Assad.

This is a real bad case of laying down with flea-bitten dogs. She has some progressive views. For that matter, so does Drumpf. But when she goes sour, she goes to a very dark place & associates with the most loathsome, reactionary forces in world politics: General Sisi, Narendra Modi, Netanyahu, Assad.

She is an Islamophobe-supremo just as rancid as Pamela Geller. Frequently she calls out Obama for weakness in the fight against Islamic terrorism & is adamant that the roots of ISIS are in Islamic theology.

She is also staunchly pro-Israel & hateful to Palestinians so to see her videos endorsing Assad circulated by Palestinian supporters is deeply disturbing. Last November, she traveled to Cairo, Egypt in a congressional delegation headed by stone-cold reactionary, racist, & xenophobe Rep. Dana Rohrabacher to meet with General Sisi & discuss with the junta how “to strengthen a vital alliance against Islamic terrorists.”

She converted to Hinduism & has developed strong political connections to Indian prime minister Modi, a nationalist extremist implicated in the 2002 pogrom of Muslims, but she also has connections to BJP, the rightwing Hindu nationalist party, including financial support from members. The deeper connections are political–hatred of Islam–not to Hinduism.

That’s quite a résumé for a woman only 35-years-old. She’s almost reactionary enough to serve as Clinton’s vice president. She isn’t however the kind of political person who has any place in progressive circles–regardless of her incidental liberal views. That would be taking lesser evil politics to their worst extremes.

(Photo is Gabbard with Sisi and Rohrabacher in Cairo)