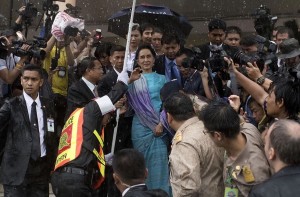 The ruthless arriviste, Aung San Suu Kyi, on a state visit to Thailand:

Media reports are all about the throngs of “Burmese migrant” workers who came to cheer her. Discretion is the very soul of propaganda so there was no mention of the Rohingya refugees, the people who dare not speak their names in Myanmar but are forced to assume the false identity of Bengalis.

As a Nobel Peace Prize laureate & vaunted “Mandela of Asia,” did she at least enquire why Thailand refused to rescue Rohingya last year when thousands were adrift in boats without food & water? Did she express concern about the 36 mass graves in the Thai jungle believed to be Rohingya fleeing genocide by the military junta in Myanmar? Or did she ask about the prosecution of top Thai military officers for human trafficking of Rohingya?

What tedious enquiries. Rohingya are not Myanmar citizens but unwelcome foreign interlopers & as such, no state concern of hers. She is the Empress-Minion of the Myanmar military junta & in return for deference she only has to make her life an ugly lie.

Solidarity with the Rohingya Muslims of Myanmar against genocide now administered by Suu Kyi.