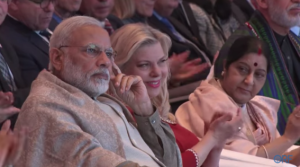 This is Modi, Sara Netanyahu, & Indian Minister of External Affairs Sushma Swaraj feigning rapture at the inaugural address given by Netanyahu to the Raisina Dialogue conference in New Delhi. It was 20 minutes of excruciating banalities spoken in Netanyahu’s white noise monotone oratorical style. But the guy didn’t go to India for six days just to give a narcotic speech to a bunch of technocrats. When Modi initiated the Raisina conference in 2016 as an international geopolitical forum it was attended by 120 delegates from 40 countries. This third year, it had 150 speakers & over 550 delegates from 90 countries. Speakers & delegates were top Indian government officials; scientists & think tank operatives from Europe, Asia, the US; top military officials, including Indian Army General Bipin Rawat, the commander of the US Pacific Command, & the Joint Forces Commander of the UK, along with other top military officials & politicians. Judging by the Twitter posts of the Raisina Dialogue, FB was all over the place at the conference.

The only thing of substance that Netanyahu said in his speech is his boast of Israel’s growing stature in the world because of increased political, economic, trade, military, & cultural relations with several countries. Israel is still fundamentally a colony whose existence is based on militarism & ethnic cleansing. The Boycott, Divestment, & Sanctions movement is having a profound destabilizing impact on Israel & undermining its legitimacy so deepening the connections to countries like India, China, & Russia are critical to its survival. And of course, Israel & India also share military affinities when it comes to occupation & controlling & breaking the political will for self-determination shared by Palestinians & Kashmiris.

This Raisina Dialogue conference is a scary operation because it shows the alliance & confluence of international forces & their determination to exert control, particularly over Palestine & Kashmir. General Bipin Rawat was one of the keynote speakers on the issue of terrorism where his remarks were very threatening to Kashmiris, not just militarily but on the issue of social media & snapping the internet.

We can be daunted by this show of military muscle by these 90 governments or we can respond by forging solid bonds of active solidarity, come hell or high water, with those fighting war, occupation, genocide. The future of humanity depends on our choice.

(Photo is screenshot from Netanyahu’s speech)