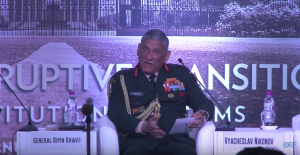 This is Indian Army General Bipin Rawat speaking at the Raisina Dialogue conference in New Delhi about nuclear & chemical weapons falling into the hands of terrorists in Kashmir & about shutting down the internet so the rest of the world doesn’t know the extremes of violence India is using against unarmed civilians.

He looks somewhat demented in this screenshot from his speech but it is apparently a reflection of his persona whose corruption goes all the way to his stone-cold heart. At some point, even posthumously, he will have to be prosecuted for his monstrous human rights crimes in Kashmir.