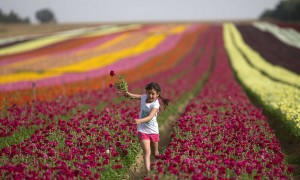 The media caption to this photo reads: “An Israeli girl picks Ranunculus flowers in a cultivated field in the southern Israeli kibbutz of Nir Yitzhak, along the Israeli-Gaza Strip border. The flower bulbs will be mostly exported to Europe.” We’re going to see a lot more of this kind of photo so we may as well get on to what they’re all about.

The critical mind so often appears to reflect paranoia, seeing malicious intent where there is only love power. More often, the unsuspicious haven’t informed themselves about the workings of the public relations industry which celebrities, politicians, corporations, & governments use to clean up their images. That’s how they turn Justin Bieber from a weasel into a reformed bad boy; Hillary Clinton from an elitist war-monger into a populist hanging with the “little people” over coffee; BP into an environmental paragon even though the Gulf of Mexico is still an oil swamp; & Israel into utopian kibbutzim farming communities rather than an armed encampment.

Israel is on a major public relations/propaganda drive to reverse the damage to their image from Operation Ethnic Cleansing in Gaza last summer. They want Israel to be seen as a land of little girls romping through the flower patch rather than the murderous war machine that hunted down small children in Gaza with bombers. So as they prepare for another bombing siege in Gaza & accelerated land expropriations in the West Bank, we’ll be seeing a lot more of these kinds of images.

One aspect of Operation Ethnic Cleansing that wasn’t reported on much was the loss of livestock in Gaza, including cows, oxen, camels, & donkeys taken out by bombs. There are many species of Ranunculus (also known as buttercups) & they are all poisonous to livestock. Seeds get dispersed by wind, birds, small rodents, & tires on Israel’s invading tanks & military trucks. Is it paranoia to wonder if planting vast Ranunculus fields adjacent to Palestinian farm & grazing land was an act of aggression & not just a commercial choice? Inquiring minds would sure the hell like to know.

After this photo op is finished they’ll want to take the little girl to an infirmary since handling Ranunculus can cause skin rashes & is inadvisable without protection.

Build the economic & cultural boycott of Israel & file this photo under “Israeli propaganda.”