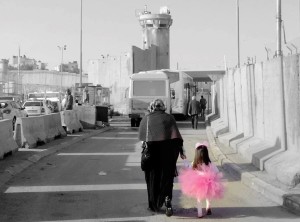 This photo circulating on Facebook & twitter had the caption: “Because occupation can’t stop you from wearing your favorite dress.” I don’t want Judith Butler fans up my butt, but I just love it.

Tracing the photo, it apparently originated on FB from a guy in South Africa who identified it as the approach to the Qalandia checkpoint, once referred to in Electronic Intifada as “hell on earth.” It is a large Israeli military checkpoint located not on the border between Israel & the West Bank but in the West Bank near the town of Ramallah & the Qalandia refugee camp. It serves as a barrier separating Palestinians & a military fortress. Israeli soldiers do identity checks here, à la apartheid, & it is the scene of frequent Palestinian protests.

And that makes me love it even more. Because a little girl ought to be able to wear tutus.