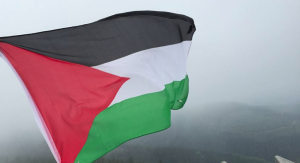 Often I tell the story of how a lone Palestinian protester at the University of Minnesota got me involved in Palestinian solidarity. It was during the June 1967 Six-Day War when the Israeli military defeated the armies of Jordan, Egypt, & Syria. It was a watershed & deeply tragic moment in history for the Palestinians.

Israel’s military victory led to the occupation of the West Bank, East Jerusalem, & Gaza; demonstrated Israel’s value to the US as a fortress for US hegemony in the Middle East (US military aid has been increasing ever since); altered the relationship between the US & Arab regimes to the disadvantage of the Arab peoples; & altered the relationship between Arab regimes & Palestinians to the disadvantage of Palestinians.

In June 1967, I didn’t know any of that & could not have pointed to Palestine on a map but the near-hysterical pro-Israel media coverage disturbed me since I knew we were being played. Why were we being whipped into a frenzy? Why wasn’t the war reporting on the Six-Day War as bland as coverage of the Vietnam War?

Walking across the U of M campus during the Six-Day War, I saw a lone Palestinian with a placard protesting in front of the student union. Hoping he would shed some light on the issue, I approached him & asked why he was protesting. In 1967, there was no Palestinian solidarity movement. Palestinians were completely isolated internationally & the Exodus mythology was riding high. The young man was scared & might have thought I was baiting him so he answered quite gruffly “They stole our land.” When I asked him what he meant, he answered again “They stole our land.” Not much, but enough for me to know there was more to the story that needed investigation & I went out looking for some answers, eventually becoming committed to the Palestinian cause & active with the U of M Arab student organization which then served as Palestinian solidarity.

Now my friend Ahmad Yacob has told me about how that lone picketer from 1967 influenced his work building Palestinian solidarity in Germany. Ahmad is from a family displaced by the Naqba to Syria. He has been organizing Palestinians to do educational work, to intervene in cultural events with exhibitions about Palestinian culture & postcards about the Naqba, & with a social media campaign. He told me he often remembers my story about the young guy from the U of M in 1967 & that to inspire the small group of activists in Germany he related the story. The fellow who stood alone & scared has no idea what an impact he has had in building Palestinian solidarity.

Perhaps in tribute to his contribution & to further Ahmad’s work to build Palestinian solidarity in Germany, you could like & share this wall from the new group that formed: