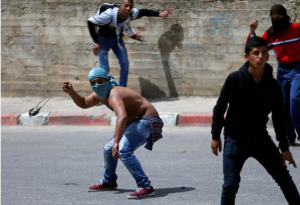 A tribute to the Palestinian stone pelter:

There is probably no more vilified struggle than the Palestinian movement against colonialism & occupation which has long been portrayed as terrorists & suicide bombers. It is likely that the full-blown hate & war-mongering ideology of Islamophobia was honed in the campaign to demonize Palestinians.

Since 1948, Palestinians have stood mostly alone in their struggle against Zionist paramilitary death squads, armed settlers, & the Israeli army backed by the US, UK, & other colonial forces. Solidarity with them is a fairly recent, although massive, development. In 2014, over a million people around the world protested Israel’s 7-week carpet bombing of Gaza.

Like Kashmiris, unarmed Palestinians use stones as defense against brutal military forces armed to the teeth with the most sophisticated & deadly arsenal. Should they just stand there & let their olive trees be uprooted, their wells poisoned, their lands confiscated, their children brutalized & assaulted? Should they just accept occupation, apartheid, ethnic cleansing without a struggle?

These Palestinians stand opposite phalanxes of Israeli security forces trying to stop protests in support of Palestinian political prisoners on hunger strike near the West Bank city of Ramallah & the Israeli settlement of Beit El.