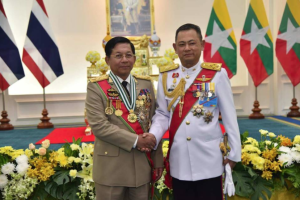 This is Burma’s chief genocidaire General Min Aung Hlaing (on the left) in Bangkok yesterday receiving the “Knight Grand Cross First Class of the Most Exalted Order of the White Elephant” from his Thai counterpart General Tarnchaiyan Srisuwan.

Apparently, in Thai & Burmese feudal tradition white elephants were considered sacred & a symbol of royal power. But in English idiomatic language, a white elephant is something expensive but useless which becomes a burden because its maintenance is out of proportion to its value. Stadia built for Olympics & FIFA World Cup games would be an example of white elephants. A ‘white elephant sale’ in the US is where you dump your used junk for sale. Ironically the English idiom came from Siam where the king would give the animals to courtiers considered a pain in the ass to ruin them because they couldn’t give them away but had considerable expense to house & feed them. This white elephant honorific from General Srisuwan to General Hlaing is of the junk sale kind. Absolutely worthless, unless he can dump it on the gold market.

The malignant affinities between these two generals don’t just involve military rule but Thai complicity in the Rohingya genocide. In the 2012 flight of Rohingya refugees, the Thai navy took decrepit boats of fleeing refugees out to sea & abandoned them. In the 2015 flight, the Thai military turned boats back from landing. Thousands of Rohingya refugees remain unaccounted for. There are also credible allegations that the Thai military is involved in human trafficking of Rohingya refugees. The Thai navy intercepts boats of fleeing refugees, holds them for ransom on islands or in forests & sells them to traffickers. In 2015, 30 bodies of trafficked Rohingya were found in mass graves or left in the open on the Thai-Malaysian border. A police task force claimed they were starved to death or died from disease while being held for trafficking.

Stand with the Rohingya people against such treacheries.

(Photo is from FB wall of General Min Aung Hlaing)