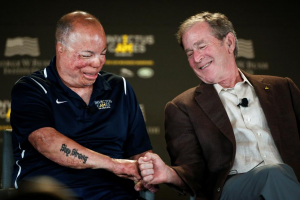 Lets get real about these Invictus Games going on in Orlando, Florida near Disney World. They’re a mockery of veterans, a patronizing spectacle of veterans wounded & disabled in US-NATO wars. How dare George Bush show up as an honored dignitary when the entire world knows the carnage of his lying-assed deceits against the people of Iraq!

The public relations schtick is that the Paralympic-style sports competition was created by Harry Windsor for disabled veterans. It’s more likely a gimmick devised in Buckingham Palace to salvage the reputation of Harry as a wastrel & international playboy & glorify war at the same time.

An entire retinue of war criminals, con artists, & indolent moochocrats lined up to promote the spectacle, including both Obamas; smarmy Trudeau; David Cameron & George Bush, both renowned war criminals; every indolent sloth from the UK who calls himself a prince & wears chests full of military medals for campaigns they were never in (Willie, Harry, & Charlie); Camilla Windsor pulled away against her will from Epsom Downs; & Betty Windsor herself on a mission to salvage the moochocracy.

Veterans do need sports events. They also need a Veteran’s Administration that isn’t crumbling from neglect; they need social services, health care, mental health treatment & counseling, affordable housing. There’s no spectacle in those things so instead they get the shaft whilst these big productions are played out as a substitute.

This “wounded warrior,” as rightwing war-mongers like to call them, is Israel Del Toro, Jr. fist-pumping George Bush, the man responsible for hundreds of thousands deaths & disabilities in Iraq & among veterans. We regret Del Toro doesn’t know he’s being used.