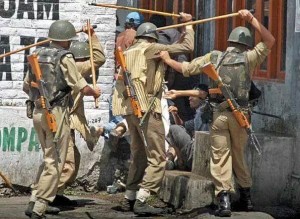 A Kashmiri Facebook friend posted this comment on his wall: “we kashmiris r ready to kick Indian dogs out of JandK.” Facebook removed it saying it violated FB community standards.

Sharp words of indignation violate community standards on social media? What kind of human rights standards are being violated by the Indian military? Will Zuckerberg end his friendship with Indian prime minister Modi over such violence? Or does indignation only get to go one way?