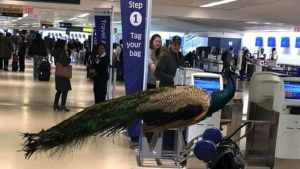 There’s apparently a furor on social media about the woman denied a passenger seat on United Airlines out of Newark for her “emotional support peacock.” The furor was over United’s decision when it should have been over the welfare of the animal. It’s a huge dilemma for pet caretakers that our beloved animals have to fly in cargo where it’s cold & bereft & they’re terrified. But the issue here isn’t that. It is not in the best interests of the peacock to be grafted to a woman with psychological problems. The peacock is a bird & a very social animal who needs to bond with its own species & be allowed to live like a peacock, not be carted around like an accessory. If the woman needs an emotional support animal she ought to get a dog who are suitable companions to human beings.