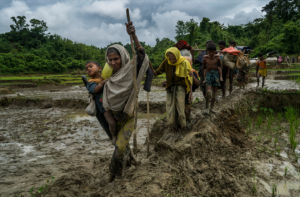 The origins of the oppression of Rohingya are quite complex but are rooted primarily in the intentionally divisive policies of British colonialism which played ethnic & religious groups off against each other. Classic divide & conquer stuff. That was exacerbated during the WWII occupation of Burma by the Japanese. Arakan state Buddhists allied themselves with the Japanese while the Rohingya Muslims collaborated with the British to defeat Japan.

There’s a lot of mythology around the person of Aung San, a key figure in the independence of Burma from Britain & the father of Aung San Suu Kyi. He was a nationalist, anti-colonialist, & founder of the Burmese Communist Party influenced by Stalin’s nationalist views on self-determination for ethnic minorities. His role is monumental in the formation of Burma, most importantly in laying the juridical & social foundations of discrimination & conflict between the dominant Bamar (Buddhist) ethnic group & other ethnic groups in Burma. Burma now officially recognizes 135 distinct ethnicities but there are many unrecognized ethnic groups, including especially the Rohingya.

The dominance of the Bamar & conflicts with ethnic groups were incorporated into the foundational document of Burma called the Panglong Agreement of 1947. Only the Bamar & three other ethnic groups were allowed to participate & debate if they could form a united state when the conflicts cultivated by the British Raj were far from being understood let alone resolved. The Rohingya were among those excluded. Efforts to deny Rohingya citizenship began with Myanmar’s independence in 1948 but pogroms against them go back much earlier. The entente between the Bamar & the three ethnic groups who signed the Panglong Agreement broke down immediately after independence so that the central government (a military junta since 1962) has been engaged ever since in constant armed conflict with several ethnic insurgencies using the methods of discrimination, torture, arson, robbery, rape, unlawful arrest, & massacre.

The reasons why the Rohingya were singled out to be denied citizenship & subjected to a policy of genocide originated under British colonialism & have nothing to do with influence by Al-Qaeda or ISIS. Burma is a prison house of nations.

Photo is Rohingya refugees who crossed into Bangladesh last Friday after walking days to escape violence.

(Photo by Adam Dean for The NYTimes)