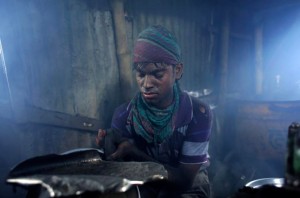 One of the features of neoliberal economics is the systematic degradation of adult labor which is why there is such a global, massive increase in child labor. Trade union officials are incorporated into the power structure (using the old-fashioned corruptive methods of money & prestige); union organizing is harshly repressed; in many countries, union organizers & officials who cannot be corrupted are murdered. And the conditions of labor, especially safety conditions, are barbaric. Neoliberal economics are sweatshop economics–just a step above outright slavery.

This young man works in an aluminum factory in Dhaka, Bangladesh working dawn to dusk with no safety equipment for about 30 euro (US $33) a week. According to reports, most of the workers at the aluminum factory lost their homes due to river erosion & flooding & moved to the city for odd jobs. The aluminum factory is something of a death warrant for the workers. It doesn’t provide them a decent life; it barely provides them survival.

They’ve known for over 100 years how toxic aluminum is to human life. It isn’t biologically needed by the body in any amount but is pumped into our systems through cookware, antacids, aluminum cans, antiperspirants, cosmetics, water, foodstuffs (like baking powder), hemodialysis. Imagine then the amounts these workers are ingesting in processing the metal without any safety & protective equipment.

In many countries the US labor officialdom operates in collusion with the US State Department & even the CIA to maintain these oppressed conditions of labor; foundations like the George Soros foundations drown the union officials in money to corrupt them. This is another case of chickens coming home to roost because part of the deal for the US union officials is keeping American workers groveling to the power elite & that ain’t working out for working people anywhere.

There needs to be a day of reckoning with the present union officialdom through the fight for democracy within the labor movement. That will be killing two monsters with one stone by advancing the interests of US workers & getting the malignant alliance of CIA-labor officials-State Department off the backs of workers in Bangladesh & elsewhere.

Our fullest solidarity with these aluminum workers. Our commitment is to make that day of reckoning soon because “an injury to one is an injury to all” truly is the clarion call of justice.