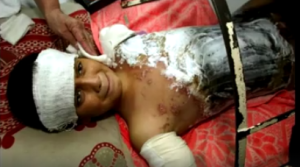 In June 2011, Hillary Clinton, then Secretary of State, gave a speech saying it was time the US started thinking of Iraq as a business opportunity because of its oil supply & because it had one of the largest customer bases in the Middle East.

At that time, as a result of the US war, an estimated 500,000 Iraqis had died since the invasion in 2003; child malnutrition rates were nearly 30 percent; almost 70 percent of Iraqi children suffered psychological problems; most Iraqis had no access to safe drinking water which caused a cholera outbreak in one part of Iraq; the US use of depleted uranium & white phosphorous had caused hundreds of thousands of birth defects & cancers; at least 3 million Iraqis had been displaced or fled as refugees to other countries; 500,000 children had died as a result of US sanctions.

None of that registered as human rights or war crimes to Clinton who as Secretary of State knew exactly what was going on in Iraq. She had her come-to-Jesus-moment in 2014 only when she considered running for president & realized an antiwar stance would make her rightwing, war-mongering politics more palatable to voters.

Those who campaign for Clinton as the lesser evil candidate have lost their grip on reality. It’s one thing to be a lesser evil voter; it’s quite another to campaign for Clinton. The majority of American voters don’t even bother to register because they want no part of this travesty & mockery of electoral democracy. When you campaign for Clinton precisely because she will take more aggressive military action against Assad in Syria, you have placed yourself not just on the wrong side of justice but on the side of barbarism.

No to US wars & bombing! Yes to immediate, unconditional withdrawal of all US forces, mercenaries, CIA operatives, & other vile creatures associated with the Pentagon.

The photo is an Iraqi boy, a victim of US militarism.