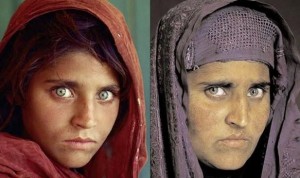 The renowned image of the “Mona Lisa of Afghanistan” from the cover of National Geographic in 1985 has been replaced with a copy of her mug shot from Pakistani immigration authorities. In 1984 when the iconic photo was taken, Sharbat Gula lived in a refugee camp in Pakistan, a refugee from the Soviet war in Afghanistan. Her parents had both been killed in Soviet bombing when she was 6-years-old & her grandmother & siblings walked across the mountains to get to the refugee camp in Pakistan.

Steve McCurry, the photographer, made quite a mythological travelogue out of his 17-year search to identify & locate her after she left the refugee camp & returned to Afghanistan–where she married & had kids. When McCurry located her, he asked if she had ever felt safe & she answered, “No. But life under the Taliban was better. At least there was peace & order.”

Now Pakistani authorities in Peshawar, Pakistan have detained Gula for questioning for obtaining immigration papers using a false identity. She’s one of an estimated 23,000 undocumented Afghan immigrants in Pakistan nailed for false papers. Of the 2.5 million Afghan refugees, only 1.5 million are registered; the rest are undocumented & these are being especially targeted for deportation. This is all part of Pakistan’s several-year campaign to drive refugees back to Afghanistan since US & Pakistani bombing have created millions of Pakistani refugees & there is no place to house more.

Human Rights Watch still cannot bring itself to condemn the US-NATO war in Afghanistan or drone bombing in Pakistan, but this week it issued a report criticizing Pakistan for forcibly expelling an estimated 33,000 Afghan refugees & for the crackdown & scapegoating of Afghans after the December 2014 massacre of schoolchildren by the Pakistani Taliban. The crackdown includes harassment, intimidation, beatings, & evictions from their homes by police in an acceleration of the campaign to deport Afghans back to likely homelessness, starvation, unemployment, war, & occupation.

This has gone on long enough! There are spring antiwar protests against the US-NATO wars. Grab a placard demanding “US out of Afghanistan!” “US out of Iraq!” & hit the streets.