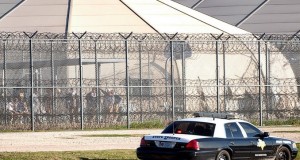 Last Saturday, local TV stations were filled with excited reports about a prison “riot” in Raymondville, Texas about 40 miles from the US-Mexican border. The newscasts were presented from the point of view of law enforcement since local & state police were there along with the FBI & Drug Enforcement Agency. Images were of prisoners in the yard shaking down fences & the only explanation offered was inmates were discontent with medical care.

It wasn’t mentioned in the reports, but the tented facility gave it away as a prison for undocumented immigrants, some arrested for alleged drug crimes but most for repeatedly crossing the border after deportation. Immigration infractions used to be treated legally as civil misdemeanors but are now criminalized & account for 87% of the massive increase of Latinos in the federal prison system.

One of the things driving criminalization of immigration is the development of a second-class private prison industry & the cash nexus between US immigration officials, municipalities where the prisons are built, & the corporations that profit from a large prison population. Officials who play ball with the corporations & feed prisoners into the system rather than deport them can move from government jobs paying a couple hundred thousand bucks a year to one in the private prison system paying over a million. But they don’t just feed long-term prisoners into the system; they turn a blind eye to egregious, monstrous human rights crimes in the prisons.

There have been years of condemnations of these private prisons all over the US–especially those warehousing undocumented immigrants. Conditions are barbaric. The Raymondville facility is nicknamed “Ritmo” because of its affinities with Guantanamo torture center. An ACLU investigation reported overcrowding, filth, roaches & vermin, stinking filthy, backed-up toilets, raw sewage in dormitories from toilet overflow, racist verbal abuse, physical abuse, including excessive solitary confinement, & deaths from lack of medical care. There is no medical staff on site to handle routine injuries & maladies, accidents, infections & diseases contracted from the filth & sewage, or emergency treatment. There is almost a complete absence of due process & prisoners can look forward to years of this kind of barbaric treatment.

The big concern for immigration, municipal, law, & prison officials was public exposure of these atrocities that could cut off the money machine from treating undocumented immigrants like beasts. The media is fully aware of this criminality & chose to turn its back on human beings suffering the unbearable. They dummied up, neglecting to even mention conditions or that the prisoners were undocumented immigrants so that public outrage would be blunted in a border region with thousands of undocumented & considerable political affinity with them.

The US prison system is one of the most bloated in the world & it is no accident that a huge percentage of them are Black & Latino, including undocumented immigrants & Black & Latino kids framed up for minor offenses. As austerity cutbacks & unemployment bear down harder on those populations, rebellion is going to become more organized, less compromised with the Democratic Party, & will pose a considerable threat to the status quo. People can stop looking for the savior from among privileged white men. This is the population that will produce those leaders because these are the people who know the full weight of racist & misogynist oppression.

L.D. Barkley was a 21-year-old spokesperson for mostly Black prisoners during the 1971 uprising against the same conditions at Attica prison in New York State. He wrote: “We are men! We are not beasts & we do not intend to be beaten or driven as such. The entire prison populace—that means each & every one of us here—has set forth to change forever the ruthless brutalization & disregard for the lives of the prisoners here & throughout the United States….What has happened here is but the sound before the fury of those who are oppressed.”

When New York State troopers retook the prison, they sought Barkley out & took him out by shooting him in the back. But his powerful words should ring out as our anthem to stand against the racism, inhumanity, & degradation of US immigration policy & profiteering at the expense of other human beings.

Our fullest solidarity with the prisoners at Ritmo who have now been moved & dispersed. Many of them are being subjected to torture for this uprising. Our regrets we are not yet strong enough to stay the hand of racist hatred & anti-immigration policy. But your protest was not in vain because now the barbarism stands exposed.