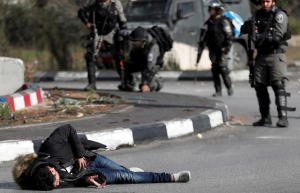 That so many around the world do not understand the Palestinian struggle is not a mystery. The miracle is that so many do despite 70 years of systematic propagation of the Exodus myth & the portrayal of Palestinians as terrorists.

Social media has played no small part in exposing the realities of Israeli colonialism, apartheid, ethnic cleansing. It’s too late in the game for media to keep peddling sentimental Exodus rubbish after the carpet bombing offensives over Gaza & after we’ve seen years of photos & videos of Israeli occupying soldiers manhandling, assaulting, & arresting unarmed protesters & especially so many little kids. So committed are governments to the Exodus narrative & not to be daunted by looking like jackasses, Reuters (whose reporting on the Rohingya genocide has also been absolutely foul) captioned this photo: “Israeli border policemen stand away after shooting a Palestinian man with a knife & what looks like an explosive belt near the Jewish settlement of Beit El, near the West Bank city of Ramallah.” The Palestinian shot here is a young man, possibly a teenager. Since when is carrying a knife–if in fact he has one–a cause for summary execution? Is carrying a knife a capital offense? Could that thing that “looks like an explosive belt” possibly be a fanny pack? Or is he holding his bullet wound so he doesn’t bleed to death? Under international law, those soldiers should be rushing to get medical care for the young man, not standing there gloating over his body. How shameful of Reuters. How criminally vile.

Stand with Palestinians by honoring the boycott of Israel. Check the label on every product you buy to make sure the country of origin is not Israel.