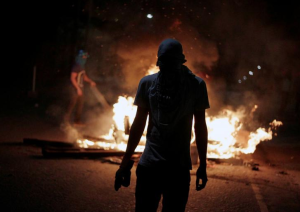 There’s been so much adrenalin spent over the Honduran ambassador to the UN voting with Trump to make Jerusalem the capital of Israel. Not only is the US military vital to Honduran drug trafficking, but the vote was a quid pro quo thing in exchange for the US supporting the illegal presidential election of incumbent Juan Orlando Hernández, a corrupt politician accused of stealing public funds & now the election. Of course the Honduran representative voted with the US so as not to bite the hand that feeds corruption.

This protester in Tegucipalpa, Honduras speaks for the Honduran people who in their majority would stand with the Palestinian people if they were allowed to vote.