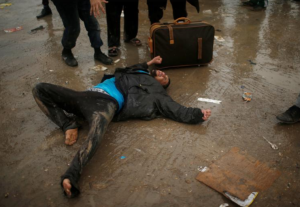 An Iraqi man fleeing the battle between Iraqi ground forces, US drone bombers, & ISIS fighters on a rainy day in western Mosul:
According to media reports, over 100,000 civilians have fled Mosul. There is no accounting of civilians killed in the crossfire or by bombing nor of the men & boys detained by Iraqi soldiers as they fled.

ISIS needs to be defeated but it isn’t going to be with this kind of warfare which victimizes more civilians than ISIS fighters, or without ending the weapons supply to ISIS from other countries, including Russia & the US. It won’t be defeated by foreign armies not interested in human freedom but who are fighting out competing claims to control over the Middle East. It is time to think outside the Pentagon & Kremlin strategic death traps which have made a killing field of Iraq, Syria, Yemen.