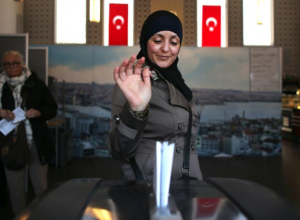 Geert Wilders–the extreme right-wing Dutch politician & “Trump fanboy” with the bleached blonde pompadour who considers Islam a fascist ideology–just lost the general election he was expected to win. The turnout to the polls was 82-percent, the highest in 31 years so the desire to trounce him was high.

This woman casting her vote at a mosque in Amsterdam is one of those who gleefully handed Wilders his ass.

Now if the US Congress can just get its act together to investigate Trump’s financial connections to other countries & his back channel negotiations with Russia we could nail his ass for treason. Pence won’t be one whit better than Trump politically so some think we should keep Trump whose deranged outbursts expose the character of the US government. There are other ways to get the picture that don’t involve listening to racist vituperations against immigrants, Muslims, Blacks & Latinos.