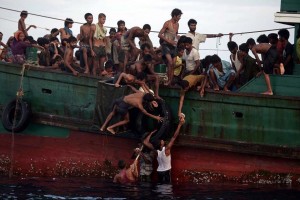 There’s been a lot of chatter on the left for a long time about the need for a united party to counterpose to neoliberalism, the barbaric phase of capitalism. And indeed that is a crying need. But before you talk about a party you ought to talk about working together to address the miseries all around us created by neoliberalism. If you can’t work harmoniously for justice, what the hell is the point of a group where you’ll be at each other’s throats over doctrinal differences?

The wars, Palestine, women’s rights, sweatshops, child labor, civil rights, civil liberties, the immigration crises everywhere on this planet are issues where unity can be forged in action. But most of the left is nowhere to be seen & lord knows, there’s enough of them selling newspapers. What the hell are they doing? Where are they concentrating their political energies?

No one who lives in the US should be riding a high-horse but still the question emerges, “Why haven’t left groups in Europe been organizing protests in defense of immigrants in the Mediterranean? We know there are immense political movements in Southeast Asia. Where are they in response to the crisis in the Andaman Sea? Are protests just not being reported anywhere? Are human rights groups, like too many in the US, all tied up in foundation hush-money?

This photo is Rohingya immigrants scrounging for food in the sea after Thai helicopters dropped parcels. The ones in the water are passing food supplies to those on board, including many small children. The UN & other human rights agencies haven’t sent rescue boats–& mind you, the UN has a military it can deploy if need be; & it has resources. Their hand-wringing is not a worthy response to this massive catastrophe. The left should be responding to all this–not twiddling with irrelevancies & factional disputes.

One of the operational mantras of capitalism is “find a need & fill it.” That’s pretty much what human smugglers are doing & they’re being chastised for it. Well there’s a much more pressing political need in immigration that needs to be filled & that is building international solidarity: picket lines, rallies, teach-ins, & speak-outs to educate on the human right of immigration & why “an injury to one is an injury to all” is the iron law of social transformation.

If the left can’t get together & work on that, they’re not much use at all. And the certainty is, when they’re eighty, they’ll be even more tiresome than they are now.